"Third Basemen"
A Wing of the BBA Hall of Fame 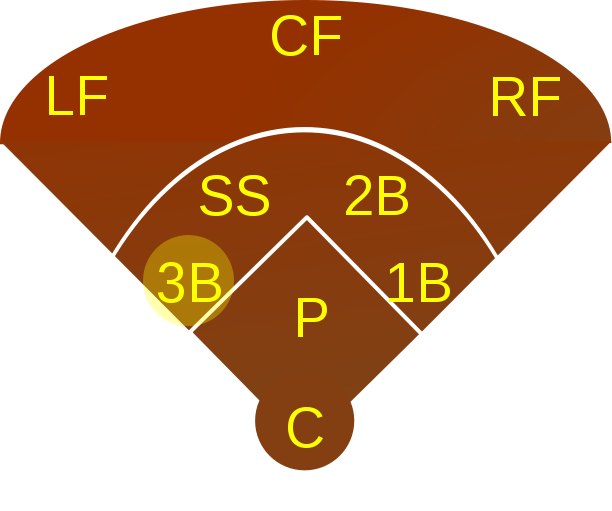 The Position of the Third Baseman


The BBA Hall of Fame is home to eight men who primarily manned the hot corner during their esteemed careers. Our first 3B inducted was in 1996, Jon McNecirty and our most recent was Trey Williams in 2026.

From his debut in 2005 through his retirement in 2021, Dale Bunker was a consistent run producer at the hot corner for the Baltimore Monarchs before finishing his career with the Des Moines Kernels. What his offensive lines lacked in black ink, his glove at third base made up for. His best offensive years came from ages 23-25, culminating in his 2009 campaign where he hit .348/.394/.614 (158 OPS+).

Outside of his Sawyer Silk Award winning 1981 season (.348/.432/.493 144 OPS+), Caldwell does not have the eye-popping offensive numbers that you might expect from a Hall of Fame third baseman. Instead, longevity and consistency have earned Calwell his plaque. At age 22, he was worth 2.0 WAR. At age 23, his bat really arrived, and never left him. From that season until his retirement at age 38, in only that final season was his offensive contribution below league average. With a balance of above average on base skills and average power, his OPS was regularly over .800.

One of the premier third basemen of his time, over nearly two decades, Eisenhower's glove was as brilliant and steady as his bat--which was elite from the right-side of the plate. He was a key member of three elite franchises in Las Vegas, Huntsville, and California, leading the Phantoms to a Landis with one of his Puckett Golden bat seasons in 2028.

Dwayne ‘The Rock’ Johnson was, unsurprisingly one of the most popular players of his time. Some may argue that his Hall of Fame induction was based more on his popularity than his performance, but we think he’s deserving. He was a contributor on defense, in addition to being a superb offensive player, he was a solid contributor with the glove. From ages 23-36 he had only one season below a 116 OPS+ and for his career he garnered 101 points of gray ink.

[hr]
‘Natural’ Jones played 14 obscenely productive seasons in Louisville before finishing his career with time in Huntsville and Chicago. You want peak production? He had a couple peaks. Longevity? Check. His only season under 2.4 WAR was his last season (1.4). For his career, his OPS+ clocked in at 134 but somehow only earned 8 points of black ink and 17 points of gray. Two Silks and 9 All Star appearances speak to his peak performance and his popularity.

McNecirty, at first glance, may not appear to be Hall of Fame worthy. Now, don’t get us wrong, he was a great player and had a long and successful career. But with a career OPS+ of 110, he doesn’t quite measure up to his peers in the Hall. So why is he here? Well, he was one of the unfortunate ones who was just a bit older when the BBA began. In the inaugural season of 1973, McNecirty was 25, an age at which a modern BBA player would be in the middle of their arbitration years. He hit the ground running with a .312/.381/.518 line and was a consistent 2-4 WAR player every year, with a couple of 5 and a half win seasons thrown in.

Urban made his BBA debut at age 24 with the Greenville Moonshiners. Originally a SS, he was good enough in the field to win a Zimmer in 1997, his third BBA season. After a trade to the Las Vegas Hustlers in 2000 he didn’t play much SS, but rather became an excellent third baseman, and ended his career with about three times as many innings at the hot corner than any other position. Though he lacks the peak performance of some Hall of Famers, he was an extremely consistent offensive force. He didn’t have an OPS+ under 115 until age 36, and even that was just a blip as he had a late-30s resurgence, even posting a .250/.373/.395 line in 2013 at age 42.

Trey Williams made his name as a hit machine for the Seattle Storm in the twenty-tens. Twice leading the league in hits, he won two batting titles, in 2011 and 2014. He makes the cut for the Hall of Fame as peak performer rather than a compiler, retiring at age 36 and really losing his star-quality play by age 33. His best season was in his batting champion season of 2011 where he posted a .373/.423/.547 line, good for 7.3 WAR.

Return to “The Hall”