CAIRO - The Pharaohs’ ballpark was quiet during All-Star Week, but one man whose name has long been synonymous with the All-Star Game spent the week making his presence felt in a different way.

Some may remember Captain Diesel Dave vowing in a TV interview before the season that he’d build a nightclub for his new team. As it happens, he’s a man of his word, and Dave’s new nightclub is now open for business at the Pharaohs’ ballpark. 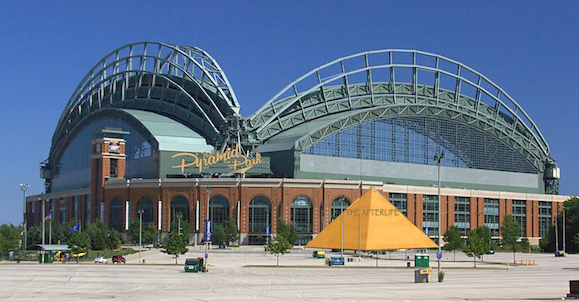 The Afterlife and Pyramid Park
The club, dubbed “The Afterlife,” is shaped like a small pyramid, and built attached to the ballpark, with a special entryway that connects the two buildings. Fans will be able to visit with or without game tickets, and the club will be open late into the night, even after the park closes.

Dave was present to cut the ribbon for the grand opening. He showed off the two separate dance floors, full bar area, “and best of all,” he said in a hushed tone, “there’s a secret entrance behind the bar that leads directly to the Pharaohs’ clubhouse. So players will be coming in after games, hell, maybe even between innings.”

At that moment, shortstop Rick Chambers wandered in, Foster’s in hand.

“Hey Diesel, this place is bloody ripper!” he shouted. “We’re all having a round before batting practice, you in?”

Dave flashed a smile and addressed the gaggle of reporters who weren’t sure what to make of the situation. “Seems like morale has already improved around here,” he said. “This might be just what we needed to get rolling.”

Bench coach Tayyab Nabil, however, had a differing opinion of the new hangout.

“Everything about it is awful,” he said to reporters. “The Egyptian-themed decor is tasteless, bordering on offensive. Diesel knows absolutely nothing about Egyptian culture, and this place in no way represents the people here.
And he really needs to stop playing that “Walk Like an Egyptian” song — it’s been blasting on loop all afternoon.”

Nabil went on to criticize Dave directly. “The guy needs to get his priorities in order. He’s hitting .220, striking out four times a game, and dragging the rest of the team down with him. And instead of working on his game, he’s in here pouring drinks for fans. What kind of leadership is that? He needs to stop with these ‘business ventures’ and put more focus into what’s happening on the field.”

Time will tell whether the new facility will be an unwelcome distraction, or just the boost the team needs to get through this rough season.