Could Knuckleballer Ramos debut this season for Cyclones?(43.29)

Could Knuckleballer Ramos debut this season for Cyclones?(43.29)

Word around the halls is that Omaha has secretly called up left handed knuckleball thrower Leonardo Ramos up from AA and is planning to insert him into the rotation. While it’s usually not a big deal for a team to call up a player, this would be a different situation as Ramos is currently spending his time in Double-A.

Ramos is not one of Omaha’s prospects that is expected to do much damage at the BBA level, but with his performance in AA, he is apparently starting to get a look. He has a 3.28 ERA through 71 innings, having walked 46 and struck out 59 batters. Not exactly what one would call eye popping stuff. His BABIP however of just .219 should be attributed to his knuckleball which is graded out by scouts as a 10 out of 10.

If Omaha is indeed planning to roll the dice on Ramos, it certainly wouldn’t be able to be kept a secret as they would have to announce the contract purchase. Besides, why would they want to keep fans from knowing about the debut.

He doesn’t even look good but I Just guess there something about knucklers. 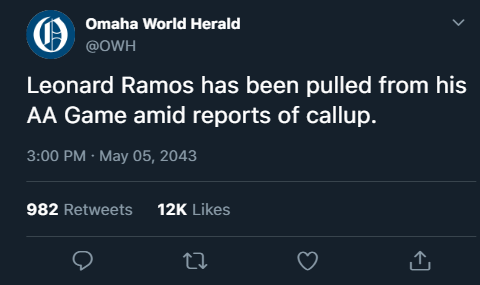