Oft-injured Reyes
And this time it’s pretty close to catastrophic: he tore the ulnar collateral ligament in his pitching elbow during the first inning of a game for the Carolina Flight on May 5 against Kalamazoo.

Doctors say he’ll be out of action for at least 13 months and will undergo Tommy John surgery to repair the elbow.

Reyes had just come off a two-week stint on the Injured List for a strained back, and also had been sidelined with back spasms during spring training. He had been sent to Carolina, the AAA affiliate for the Black Sox, to rehabilitate and get in shape after missing time with the back injury.

The Black Sox front office declined comment on the latest injury to Reyes, but sources close to the team said it’s likely he’ll be cut at the earliest opportunity.

“Maybe it’s time someone else had the privilege of paying his Blue Cross premiums,” one source said.
Top

I demand a version of below done for Reyes: 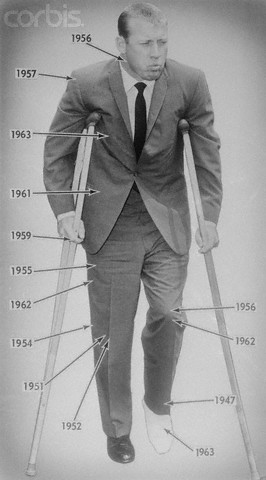