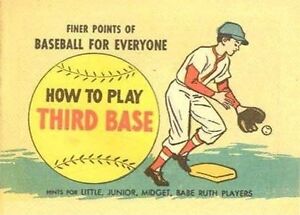 Last year we took a position-by-position dive into the Yellow Springs minor leagues just after the amateur draft. I figured it was time to do a bit of an update and see what’s changed. Of course, one of the most immediate difference is the rating scheme, which the league changed from “true stars” to “relative 20/80.” But there’s more—quite a bit more.

This is the moment we’ve come to third base, which perhaps not too surprising I suppose, holds a lot of our ballclub’s future. Just to refresh, here was last year’s overview

I’ve written a lot about Rob Thomas in the past. Yes, his glove is a bit ugly, but it’s not so warty he can’t play, and his LHB in a fairly strict platoon is 3WAR-worth, even despite that glove. At issue is that he’s moving into his second arbitration season, and going to get a bit pricey. Still, we’d love to keep him around another season or two, so we suspect we will. Time will tell. His platoon partner is Alejandro Rodriguez, who plays pretty solid defense and thumps left-handed pitcher to the tune of a 118 OPS+.

If we assume Thum will be up and starting at shortstop next year, that leaves us with the team paying Thomas through arbitration for one more season--maybe two, then, depending on the arrival of Luis Pena at short or Roberto Viramontes in the hot corner. So, yeah, decisions are coming.

The overall depth of the team at third is down a bit this year, partially because once again, we struggled to find a 3B to draft in later rounds, and because the development beats came in and washed away two of our guys (Victor Vargas, who had come in via IFA expenditure, and Ambroz Stites, a scouting find that looked interesting for awhile before getting cut down.

Given all of that, and given what we’ve seen before, it’s no great surprise that Thum and Viramontes are options A and B here again. Nathan Moon has made some strides in the infield while taking a step back with the bat. He’s still on the prospect radar screen, though.

Given the state of the club’s major leagues and the prospect list at the top end, the risk of this shallow list isn’t huge, but it’s also not zero. Look for the Nine fo accentuate 3B in the future.

To be honest, we really didn’t even think we had a dark horse in out midst, but then we got a little creative, and saw Randy Williams and Raul Valdez, both of whose ratings are a bit interesting and who are in a fairly deep collection of corner outfielders. It helps that they’ve also both hit pretty well on their way to traveling through two levels in 2038 as outfielders. The plan right now is to send them to the FPL and have in butcher the hot corner for a few games to see what might happen.
Yellow Springs Nine
Playoff Regular, Landis Averse
Top
Post Reply Previous topicNext topic
1 post • Page 1 of 1