"Second Basemen"
A Wing of the BBA Hall of Fame 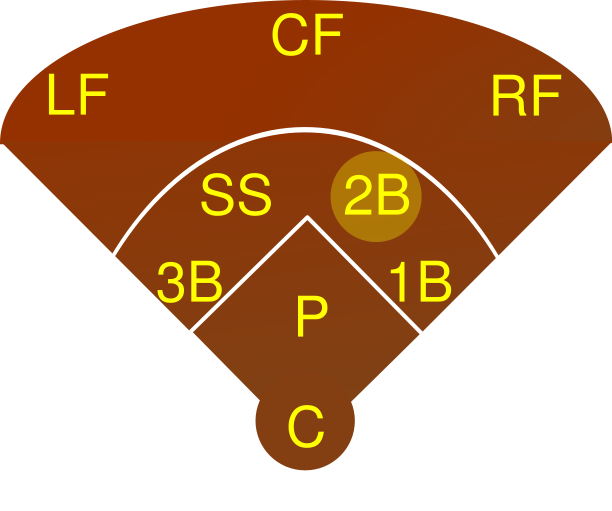 The position of the second baseman

Good second basemen need to have very good range, since they have to field balls closer to the first baseman who is often holding runners on, or moving towards the base to cover. On a batted ball to right field, the second baseman goes out towards the ball for the relay. Due to these requirements, second base is sometimes a primarily defensive position in the modern game, but there are hitting stars as well.

Masaki was an incredible asset to the Omaha Barnstormers from 1978 throughout his entire career that spanned to 1991. In total Makasi finds his name atop the all-time franchise leader board in a number of different categories. Although Masaki kept to himself throughout much of his career, he was very well respected by his teammates and at times there was nobody better stealing 2nd, nor playing second. –Justin Niles

Van Winkle was an outstanding offensive player whose propensity for extra-base hits and stolen bases made him one of the most exciting and electric players of his era. He was also a versatile, if not exceptional, infielder who could play all four positions and would selflessly move about them depending on the needs of his teams.

Pere had a lengthy career in the league, most of which was spent with a subpar Omaha Barnstormers team. Despite the lack of team success, Pere was a standout primarily with his bat. He was a power producer at second base, a bit of a rarity. Though he was a below average second baseman throughout his career, he ultimately would win his sole Zimmer Award later in his career as a first baseman.

Newhouse was the heart and soul of a Mounties franchise that went to four Landis Series during his tenure, winning two of them. He was a rare player for his time, taking more walks than any player in the history of the league at the time of his retirement, also having the rare power/speed combination for a middle infielder. While not an elite defensive player he was a pretty good second baseman consistently.

Noboru was one of the best pure hitters in the history of the Brewster. While not a home run hitter, he supplied his power by hitting to the gaps and getting extra base hits as a result. His great eye certainly contributed to his success as well, and in his prime was a excellent defender.

Maselli burst into the league as one of the most electrifying contact hitters the league had seen in quite some time with the California Crusaders. After he moved on to the Seattle Storm, he continued producing his gaudy batting averages but also improved into a 20-homer a year bat. After the 2004 season, Maselli shocked the world by electing free agency, ignoring overtures from all BBA teams, and instead signing with the Brussels Eagles of the upstart European Baseball Association. As expected, he completely dominated that league over his four years there. Wanting a new challenge, he returned to the BBA in 2009 at age 34 and picked up where he left off. His longetivity was amazing as well into his age 39 season he was still a .330 hitter. In a tip of the cap to his European fans, he closed his career out in 2016 with the Rome Raiders at age 41. Maselli truly had a one of a kind career.

Perhaps the greatest position player in league history, Puckett is the All-Time Record Holder for Games Played, Runs Scored, Walks, and WAR. The league honored Puckett by establishing a “Golden Bat Award” for each position annually in his name, starting with the 2020 season, quite an honor for a player who at the time was still active. He was a top notch defensive player at both second base and third base, even playing shortstop at times. Puckett is truly one of those players who you could truly say “there may never be another one quite like him.”

Eric Martin spent his entire career as a member of the Atlantic City Gamblers, and while at first glance his stats may not seem special, a second look proves otherwise. Martin is the gold standard as a defensive second baseman, winning a Zimmer Award seven times in his career. At the plate he was a solid contact hitter who also contributed on the bases with his speed and smarts.

Stauffer was, simply put, a model of consistency throughout his career. Early in his career he was an integral part of highly successful Montreal Blazers teams, and that continued as he moved on to the Las Vegas Hustlers. An incredibly durable player, he played in 150 or more games in 10 straight seasons. Early in his career Stauffer was a fantastic second baseman, and even as he aged he was more than serviceable. He was the type of player that flew under the radar as his career unfolded, but looking back at the whole of his efforts it becomes easy to see what a fantastic player he was.

A fearsome competitor and epitome of the term "professional hitter," Ol' Big Head was a fixture in Louisville for over two decades. Clough was alsom more than the sum of his hits. Over his career he played plus-defense at three positions (2B, LF, and 1B). By WAR, his best season was at age 27, when he posted a .353/.424/.493 slash, stole 45 bases, and hit 11 homers. But his was a career studded by these kinds of seasons, and included a 6.3 WAR season in 2024 and a 7.3 WAR total in 2029.

He finished his career reunited with GM Stu Hopkins, who brought him to Wichita and watched him post an on-base percentage of .419...at age 43.

Re: BBA Hall of Fame: Second Base Wing

Bumped for the addition of Brian Clough...

Return to “The Hall”