After Boise made the Brewster playoffs for a second-straight season in 2042, many insiders proclaimed that the Spuds had arrived and would be a frequent postseason participant. Except what followed was straight losing seasons, leaving fans and the media second guessing their prior short-lived success. "Getting this club to the playoff for the first time in '41 and again in '42 was huge," general manager Joe Lederer said. "But I miscalculated our roster and didn't get aggressive enough acquiring more talent and our record since has shown my mistake."

Lederer, heading into free agency this winter, was quoted publicly saying “I promise that we will not come up empty this year. I expect that we add some important pieces even before the Winter Meetings so we can get back into the post-season in ’45.”

The Spuds have not come up empty this winter. In fact, what is empty is the team's bank account after spending $112M on two pitchers, right-handers Luther Summers and Dave Houston. Both players were announced at a press conference and Lederer's opening comment caused a stir: "Our greatest issue the last few seasons was our effectiveness out of the bullpen, so we're extremely excited to have added two stellar veterans to the pen, Luther Summers and Dave Houston!"

The throng of local and national media took notice of the mention that both players were signed with the intention of joining the reliever corps in Boise, notably that of Summers. Summers, who signed the larger of the two deals, has spent nearly the entirety of his nine-year career pitching as a starter for the Seattle Storm, last pitching out of the bullpen during his rookie season in 2036. "I had several suitors this winter, all wanting me to pitch in the back of their rotation. When Boise told me they envisioned me as a 'relief ace,' my interest piqued," Summers told reporters. "I've seen a lot of my peers have their stuff fade starting around at my age (31) and that's the last thing I want to see happen to me. I think I can pitch another seven or eight years in this league and if it has to be as a reliever, I'm fine with it. I look forward to this challenge and I'm certainly up for it! A lot of the talk around the league in about this new wave of relief aces."

When asked about the unexpected change in Summers' role, Boise pitching coach Esteban Román clued in the club's beliefs. "Luther is the consummate professional. He's always done what has been asked of him and he's 100% on-board with this change. With the reduced workload of innings, he'll should be able to pitch at a higher effort, reach back and get more strikeouts than he's shown in the last few years. Plus there's not many relievers that have the repertoire that he has."

Joining Summers in the back of the rotation with be Houston, 24, who spent the last six years in one of the Brewster's best pitching staffs in Rockville. "I've spent the last four years as teammates with, in my opinion, the best pitcher in all of baseball (Danny Leach)," Houston said. "Rockville's a pitching factory and while I'll dearly miss my teammates and coaches and all the awesome fans, I'm really stoked for this opportunity."

In addition to Summers and Houston, the Spuds' bullpen will have a new look from the one from Opening Day 2044. Takanori Goto arrived mid-season via trade with El Paso (then Wichita) and filled in as a swingman. The plans for the upcoming season are for Goto to pitch extensively out of the bullpen -- aside from emergency starts -- where he had much more success (3.10 ERA/1.16 WHIP in 25 appearances versus 6.01 ERA/1.36 WHIP in 20 starts). Mitch Freemann started last season as a starter in Triple-A Salt Lake City before making his Brewster debut in May. Freemann, like Goto, bounced between the rotation and bullpen and while he held his own as a rookie in nine starts (4.09 ERA/1.23 WHIP), the 24-year-old Canadian flamethrower thrived as a reliever (2.74 ERA/0.85 WHIP in 27 appearances). The final piece of the puzzle is southpaw Dominic Lawrence, who has been told by coaches that he will be asked to be a full-time reliever in 2045. Lawrence, 28, made 29 starts last season, going 4-7 with a 4.48 ERA and 1.21 WHIP, however the lefty also made 7 appearances out of the bullpen, where he saw his fastball velocity jump, leading to a 2.92 ERA and 1.05 WHIP. Lawrence plans to drop his slider and splitter and go with a strong two-pitch repertoire, a good 95-97 MPH fastball and plus-plus changeup.

"It's not a traditional bullpen in any sense of the word," Lederer told reporters. "We have full faith in this bunch for 2045. We spent to bring Luther and Dave in here and the rest of the fellas, well, they are up to the task." 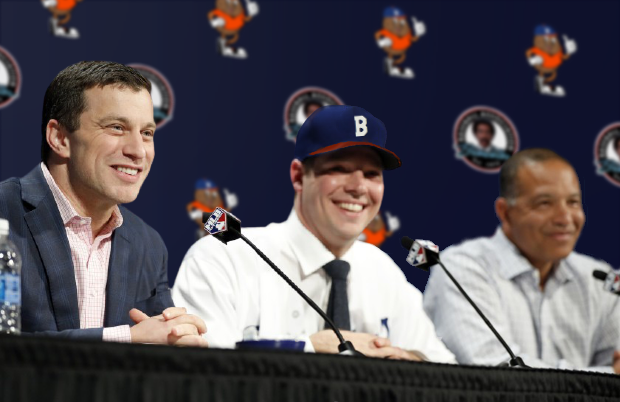 
Takanori Goto arrived mid-season via trade with El Paso (then Omaha) and filled in as a swingman.

Wichita ... Omaha ... all those Great Plains cities look the same after awhile.

They sure do...nice catch. I think I figured out the reason:

It used to be bad GM to overspend in bullpen. But with the way the game uses these relievers for 100-150 innings now I’m starting to think a strong bullpen is a must, rather than a luxury now.
Chris Wilson

The Canes bullpen stunk it up last season after having a pretty nice 2043 season with 6 of the same guys. We will see which version shows up in 2045 as I really did not land any bullpen arms to date.
Top

Nice moves on the Spuds bullpen by the way.