In international scouting news, Boise has signed amateur free agent pitcher Yeow-whye Wang out of China on Wednesday. Peter Holder, Boise's lead amateur scout in East Asia, signed the sixteen-year-old right hander after a showcase tournament in Bangkok featuring unsigned amateur Asian prospects. "Wang isn't the best player I've ever seen, but we're happy have him as a member of our International Complex. Wang is big. Not thick, but lanky. It's a good body-type for a pitcher his age and projects to grow as he develops. His fastball needs to some velo so don't expect him to come inside to any batters right now. He's got a good head on his shoulders and we'll just be looking to refine his mechanics and work on his control. He's had bouts of quick, premature outings so our staff will be working closely with him. It'll take time, it's not like there's a pill to take to cure that or anything. The key to his success will be pounding balls down in the zone or else he'll get in trouble as he faces stiffer competition. I'll definitely be pulling for him."

Wang is not related to the other teenage Chinese prospect in the BBA named Yeow-whye Wang, a catcher in the San Antonio international system. "Two Wangs? That's a lot to handle," Holder said. 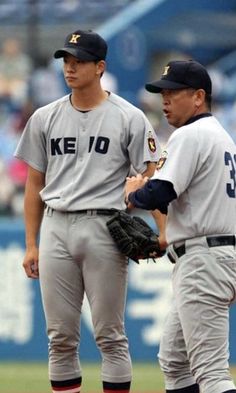 Wang (left) was playing for the Keio Rockets, a regional all-star team
of 18-and-under amateur players, prior to signing with Boise.
"My $#!? doesn't work in the playoffs." - Billy Beane Joe Lederer
Top

Troubling on every conceivable level ...
Top

On-the-field performance (or lack thereof) has me stooping to immature, sophomoric humor. It's not pretty, Vic, and I don't like it any more than you do.
"My $#!? doesn't work in the playoffs." - Billy Beane Joe Lederer
Top

I think it should be required for GMs to write a team news about every international find.
Sacramento Mad Popes
-- Pacific Champs 2040, 2042, 2043
Life is a bit more beautiful when time is measured by the half inning rather than the half hour.
Top