The Spuds unveiled plans for a $15-million renovation of Grigg Memorial Stadium that will add new seating including premiere suites, new outfield dimensions, and provide a new center field plaza as result of the new outfield wall location. The project is expected to be complete in time for next season.

Spread over two acres, the new center field plaza will include food establishments, a beer garden, and a children’s play area. Fans will be able to watch the game from above a new batter’s eye in straightaway center field, as the old outfield fence will be brought in thirty feet.

The entrance to the plaza will feature an Ad Collins statue, "the father of Boise baseball". The BBA veteran of eight seasons during the 00s returned to his hometown after retiring from the BBA and has spent the last twenty years growing the game of baseball in the state of Idaho, coaching youth club teams to running baseball and softball camps for special need children.

The left field and right field pavilions will have new restrooms, enclosed bars with views into the bullpens, enhanced seating for those with disabilities and “home run seats” just beyond the outfield wall in front of the pavilion seats. The stadium, currently tied for the lowest capacity at 35,000, will increase by 5,000. Despite all the changes, club officials say the picturesque view of downtown Boise, the nearby mountain range as well as the Boise and Sawtooth national forests will not be obstructed with the changes to the park.

Most significantly, the outfield fences will be drastically altered, the third time in five years. The most recent changes is the final phase in making Grigg Memorial Stadium a more neutral hitting environment, ending the drastic dimensions. "To be honest, I don't know how league records for home runs were set in The Grigg," an anonymous member of the Spuds' analytic department told Treasure Valley Sports. "This was first set-up as a hitters park with a short porch in left, then it became a scoring haven where doubles and triples went to die. But all along, given the altitude of Boise, balls should have been flying out of this place like crazy. Seems like the new dimensions finally take that into account but will be fair for hitters and pitchers alike."

The following are dimensions of the new proposed outfield wall, along with projected offensive factors:

As shown below, the area of the outfield area will be increased, allowing more extra base hits to fall, however the current centerfield will be brought in, leaving right-center as the deepest part of the park at 406 feet. Both foul poles will be pushed back, from 300 feet in left to 360 and 325 in right to 350. Additionally the right field outfield wall will increase from 7' to 11' to make room for a digital scoreboard for out of town scores.

The current dimensions are overlaid in red: 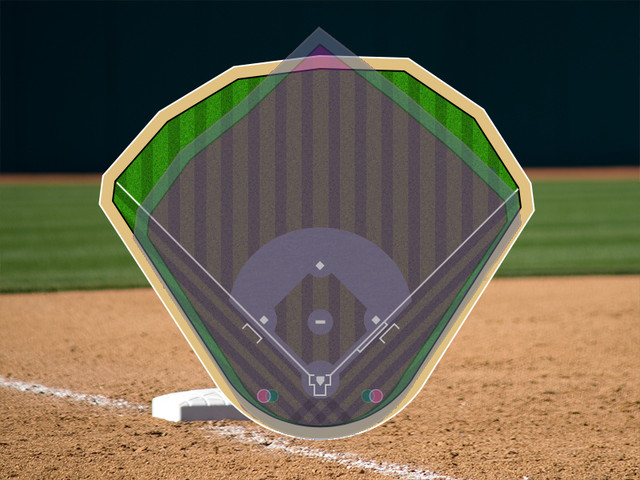