Three hits in the first innings enabled Aviators to take an early 2-0 lead which they extended to 3-0 after three innings and this time they didn’t let their opponents creep back. Crawdads did close to 3-2 but a seventh inning run for Wichita completed their fifth win of 2044. Mario Rodriguez went 2-3 including his first Wichita homer, Jose Montoya squared his record at 2-2 only allowing four hits, two runs and NO walks in his six IP while Lucio Gomez picked up his first save since joining the Aviators.

Wichita would have certainly hoped for better than a four-game sweep at home to the Talons. Game one was a most unusual No-Hitter by Phoenix, the Talons started off with a 2-0 lead after two innings and the Aviators only offence came in the third innings. Jorge Reyes was hit by a pitch and subsequently stole second before advancing to third when Duane Whitley Jr reached on an error. Mario Rodriguez then grounded out to the third baseman deep in the hole allowing Reyes to come home with Aviators only run. Three Talons pitchers shared the No-Hitter as Phoenix outhit Wichita 10-0. The second game was a lot closer, Phoenix led 2-0 and 3-2 before three runs for them in the seventh broke the game open. Two doubles and a 2-run homer by Jim Gouzzie plated four runs in the top of the eighth but Talons came back yet again and led off with a homer in the bottom of the ninth to claim the win. Luis Maldonado picked up two RBI to take his 2044 tally to 10. Aviators managed seven hits in game three but were shutout by the Talons whose three runs all came in the third innings. Maldonado’s second straight 2-hit game was the only multi-hit offing by a Wichita player. Aviators scored first in the series final game but four runs between the sixth & eighth innings for the home side sealed the sweep. Mario Rodriguez went 2-4 with two RBI while Jorge Rincon, hitting a woeful .122, went 1-2 with a walk and scored twice. Unlucky Ramon Guerrero picked up his second loss pitching seven innings allowing seven hits and just two earned runs.


Wichita’s losing streak extended to five games as they returned home to face the Outlaws. Three runs in the top of the third innings was really enough to settle game one, Aviators managed just one run all game. That came in the fifth thanks to three of their five hits they managed all game. Matt Chambers in a rare start went 2 for 4 scoring Aviators lone run. The second game saw both sides manage 10 hits and the lead bounce around a bit. A sting of run-scoring innings for Wichita gave them a 5-2 lead and allowed them to keep the win despite two runs for Outlaws in the top of the ninth. Guillaume Martin, who hit three homers in his first BBA week, finally hit his fourth as he went 2-4, scoring twice and grabbing two RBI to reach 10 for the season. Chet Dickinson pitched seven innings and only gave up two runs as he equalled 2043’s win total of three. 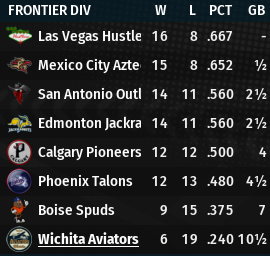 With three games left in April it’s certain to be yet another dismal April no matter how you dress it up. Even if Aviators win all three, they still won’t win 10 games in the month, a sad state of affairs that just seems the norm for Wichita over the past 10 years.
Nigel Laverick
GM Wichita Aviators #WeAreShitty
Since September 2041
JL Manager of the Year 2000 (Baltimore Monarchs)
Nothing since

Sorry you were on the losing end, but that no-hitter is wild. How cool is that?
Top

Yeah, I love opening up box scores and finding strange shit like that lol. Gives me something else to write other than “we were shit”
Nigel Laverick
GM Wichita Aviators #WeAreShitty
Since September 2041
JL Manager of the Year 2000 (Baltimore Monarchs)
Nothing since