Yeah, a 4-3 week is a nice story. But a nicer story is what happened on July 28th, 2043: 2B Angel Zalapa knocked out his 300th career home run. When asked what it meant to hit all of his home runs in a Valencia Stars uniform, Zalapa responded, "I want to hit all of my home runs in this uniform."

It's hard to ignore the elephant in the clubhouse, and all the players are acknowledging the swift moves being made by new GM, Dillon Lowery. Team captain, RF Martin Felix Jr. addressed it openly after a game this week, "Yeah, it sucks to see some of the guys who have been here for a very long time go on the call from a new GM. But honestly, we knew changes had to happen. Those guys are in for a big pay day, and we are happy for them. But at the end of the day, GM [Lowery] has to make those calls."

It was no surprise to see SP Jose Martinez and LF Ramon Pagan get traded to the Edmonton Jackrabbits and the Charlotte Cougars respectively. The two have made it known they want big paydays, and Lowery was not willing to get locked in without first fixing the farm system.

Plus, having Zalapa and CF Aaron Haney already locked into decent contracts made the decision a little easier. GM Lowery stated on a radio show earlier this week, "Honestly, I love that Z and Haney are here for the long haul. I know I want to build around them. And the fans can rest easy and go ahead and buy those jerseys. They'll be here for a while."

This week in review: vs.

July 25-28: The Stars managed to steal one game against the San Fernando Bears in the close of the four game series. This shouldn't be a surprise as the Bears are holding strong to the 2nd place spot in the Pacific.

Haney did hit his 26th Home Run in the win, and the young CL John Olson got his 4th win from his closer role. We expect to see Olson in that role for the foreseeable future.
vs.

July 29-31: The Stars swept the Seattle Storm in three games. It's a little easier to do that when your three starters go as deep as they can in each game. SP Donald Harris and SP Jafar Haamid threw complete games, and SP Jorge Garcia threw 8 innings in the final game.

The San Jose Sharks stole one from the Missouri Blues and swept the Indianapolis Downforce. This sweep is only the second of the season and hopefully a sign of things to come. GM Lowery has a made a ton of minor league moves.

The Devil Dogs are firmly eliminated from the AA postseason, getting swept in their latest series against Louisville Fire. However, Van Nuys fans get to see new prospect SP Kandy Soufax start a few games over the next month. 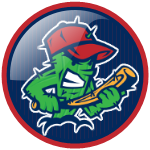 The Lancaster Cactus swept the Tombstone Geckos and are 7-3 in their last 10. Maybe the addition of new pitching prospect SP Greg Jackson has re-invigorated the team despite being 25 games out of first.

The Stillwater Shockers are usually on the wrong end of double digit losses. But this week, the Shockers had three games where they scored over 10 runs. The Shockers even managed to win 4 games... which about triples their total win count of the season. They are now 11-50.

Ignore the record. Ignore the games. The big story is the addition of 16 year old project 1B Mun-wah Hsu who arrived in a package for Pagan.
Valencia Stars GM: 2043-