Madison, WI - - In an effort to give back to the community, in 2044 the Madison Wolves are partnering with the University of Wisconsin undergrad marketing program to present you with "Saturday at the Ballpark" promotions. Each home game in Saturday the undergrads will put on a promotional event at the ballpark in Madison. "We think this is a great opportunity get get additional fans into the park, not only to see some great baseball, and experience the newly renovated stadium, but also to help the future generation of student leaders here in Wisconsin." GM Simon said.

Below is a scheduled of events...
Coming in June when the Bluebirds come to town, the Wolves' PR department will have another "bird" around. On June 11th, the Wolves' will host their first "Turkey Drop" to promote awareness for food banks in the Madison area. Once again the marketing wiz kids assure me that these are "scientifically engineered Turkeys" via confirmation of a hand written letter on what looks to be university letterhead from the schools science club for gene-splicing that these baby's can fly! We have procured over a dozen helicopters from where we will have dozens upon dozens of these turkeys dropped from the helicopters to help promote hunger awareness and local foodbanks here in the Madison area. It will be a sight to see when we release over 70 turkeys from a height of approximately 1000 feet. They will spread their wings and soar away back down to the farm! "So Majestic", I've been apart of these types of events back in the 70s. said a man later identified as Ness Lessman.

The Wolves remind you to bring a can of food to help donate to the food banks, and if you do, you get to pick a #'d Turkey from the drop and see if they win the race back to the farm. If your Turkey wins, you will be entered in a raffle to win a season pass to the "Wolves Dens", and exclusive club/suite at the park. We will also have plenty of "Thanksgiving Day" themed food all around the ball-park, along with staged Pilgrim / Native American cage matches. "Two men enter, one man leave" will be the theme.

Its gonna be a fun time for the whole family! Bring the kids, bring the grandparents, even bring that one uncle that has a drinking problem that the whole family knows about, but doesn't say anything the the Thanksgiving day dinner! It will be a blast.

So come on out to the ballpark on June 11th for a "Turkey-riffic" time! 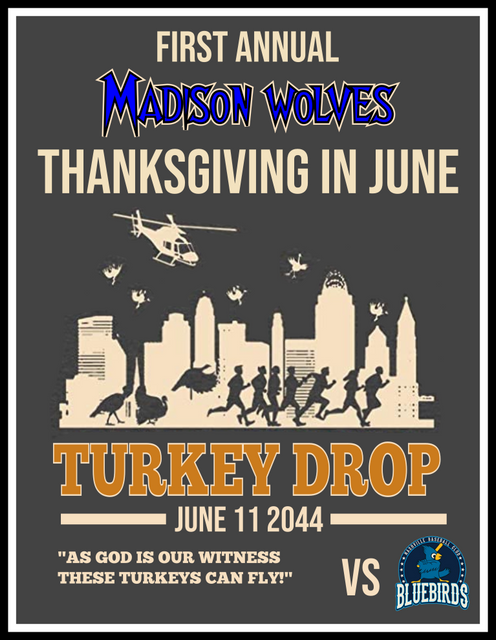 I'm quite certain that a turkey drop is something that's in the Urban Dictionary, but I'm afraid to look.
Sacramento Mad Popes
-- Pacific Champs 2040, 2042, 2043
Life is a bit more beautiful when time is measured by the half inning rather than the half hour.
Top