(Black Sox Tonight theme – “Lake Shore Drive” by Aliotta, Haynes and Jeremiah – plays as the camera zooms in on host Mandy Anderson behind the anchor desk).

Mandy Anderson: Good evening everyone, and welcome to Black Sox Tonight! We open this evening with a special report on the shocking end to first baseman Mark Simpson's season, that mysterious video that led to an Environmental Protection Agency inquiry into Sox owner Vinnie Vitale, and hints from Vitale that he knows who really is behind the whole mess.

Reporter Cliff Martin is standing by outside Black Sox Park in Calumet City to start off this exclusive report. Cliff?

(Screen cuts to Cliff Martin, wearing his trademark blue suit and beige fedora, standing with a microphone in front of the stadium).

Cliff Martin
Cliff Martin: Thanks, Mandy. First, we’ve got a little breaking news from the local field office of the EPA. They’ve identified the substance that was in the drums that several men driving a South Side Towing truck were filmed dumping into the Little Calumet River near this ballpark.

According to Letitia Dean, the director of the EPA field office for Northern Illinois, the drums contained liquefied pig manure. Five of the 55-gallon drums were emptied into the Little Cal, which caused a localized fish kill, prompted environmental cleanup efforts, and landed Sox Owner Vinnie Vitale squarely in the EPA’s crosshairs.

We caught up with Vitale in his downtown Calumet City Offices just moments ago.

(Cut to video showing Cliff and his cameraman approaching Vinnie – accompanied by three beefy body guard types - as he leaves his offices.)

Martin: She’s fine, Mr. Vitale. We just received some information from the local EPA office, which has analyzed the material dumped into the Little Cal by your drivers …

Vinnie (the grin leaves his face): Whoa, whoa, whoa there, Cliff. Those guys were not “my” drivers, as you put it.

Martin: Well, they were driving a South Side Towing truck, as the video shows. 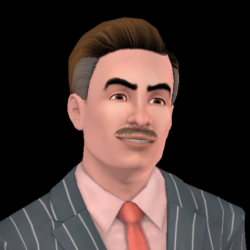 Aggrieved Black Sox owner Vinnie Vitale
Vinnie: First of all, videos can be doctored to show anything anybody wants, capeesh? And second of all, even if it turns out those guys was on the South Side payroll, they weren’t workin’ for me that night.

Martin: Well, how do you explain the fact that men driving one of your company’s trucks were filmed dumping drums of liquefied pig manure into the Little Calumet River near your ballpark?

Vinnie (the grin returns): Well, Cliffie, I don’t got an explanation for ya right now, but I got some suspicions about what happened there. And if my suspicions pan out, I’ll let ya know.

Martin: Suspicions? What kind of suspicions?

Vinnie: Well, Clifton, I got some ideas who might be behind this whole charade, which I’m not prepared to share yet.

But let me ask you something: Why would I do something like that so close to my own ballpark, which I’ve invested tens of millions of dollars in, huh? Ask yourself that, Clifty. Why would a guy pour pig poop in a river upstream of his own ballpark? Nobody with any business sense. Hell, nobody with any sense at all, right? But somebody with a grudge against the team ... say, an ex-employee with an axe to grind - she ... or he ... might.

Martin: So, you think it's a former employee of the Sox? Will you be sharing your suspicions with the EPA?

Vinnie: You’re goddamned right I will, Clarence. With the EPA, the FBI, and the Department of Labor, if it comes to that. I live here and I work here, and I would never do nothing to hurt my hometown, capeesh?

(Vinnie motions to his bodyguards and they move off towards his car).

Martin: There you have it, the reaction of a visibly angered Vinnie Vitale to the latest news coming out of the EPA.

Mandy: Well, that was interesting, Cliff. He called you by three or four different names there, didn’t he?

Martin: I guess I should be flattered, Mandy. I’m part of the club now.

Mandy (laughs): Oh, you’re not really part of the club until he tows your car a thousand miles or so … thanks for the update, Cliff.

Martin: You got it, Mandy.

(View cuts to Mandy in the studio.)

Mandy: Now, many of you might be wondering just what Vinnie Vitale was referring to about his suspicions of who might be behind the video that sparked this whole controversy.

Mandy Anderson
First, a little background: a couple of days ago, a video clip was transmitted to the local EPA office, the Calumet City Police, and posted to several websites, which showed what appeared to be a crew of workers from South Side Towing dumping drums of something into the Little Calumet River.

That prompted an EPA inquiry and, when the web videos surfaced, a local outcry. Vitale has been vehement in his denials that he or any of his current employees would dump anything in the river that flows behind Black Sox Park.

Today’s statements to our own Cliff Martin, however, indicate that Vitale has a suspect or suspects in mind - specifically, an ex-employee or employees. Until he can provide proof, however, suspicion will continue to cloud Vitale’s already-dodgy reputation.

One other point we need to raise here about that video: several people who have seen it online point out that one of the men, who isn’t seen clearly and whose features are partially hidden from the camera, resembles injured Sox first baseman Mark Simpson.

Another oddity: the man in the video appears to twist his right ankle, and bends over in pain. And the video, according to its time stamp, was taken the night before news surfaced that Simpson had aggravated the ankle injury that put him on the IL in mid-July.

The re-injury ended Simpson’s season and required surgery, and the team has been decidedly evasive about what exactly happened. The Sox also took the unusual step of flying Simpson, supposedly, to Huntsville for surgery – unusual because Chicago has several world-renowned hospitals that would have been more convenient.

One interesting thing about sending him out of town for treatment, though: it made sure that Simpson would be unavailable to answer questions about the injury.

How this all adds up is uncertain, but there certainly are a lot of interesting questions here awaiting interesting answers.

We hope the EPA and the Calumet City Police can find those answers. And meanwhile, we’ll keep digging here at Black Sox Tonight, too.

Now, stay tuned for our next segment: Jim Lorenzen: man or myth?
Top

A god amongst mere mortals.
"My $#!? doesn't work in the playoffs." - Billy Beane Joe Lederer
Top

A god amongst mere mortals.

Vinnie's a pragmatist. What can I say?
Top

A god amongst mere mortals.

He may be a god, but he's no throw rug. I keep going back and forth in offering the throw rug for French. The value gained may not outpace the value given.
California Crusaders
Life is a bit more beautiful when time is measured by the half inning rather than the half hour. -- db "Shoeless" Olmsted
Top

I've discussed Lorenzen for French with Joe, but I just can't do a one-for-one swap. He'd need to offer more. Lorenzen is a one-in-a-million talent, which oddly enough is about his batting average for the season ...
Top

Only if the DMB song “Pig” becomes the anthem of the Black Sox.
Chris Wilson