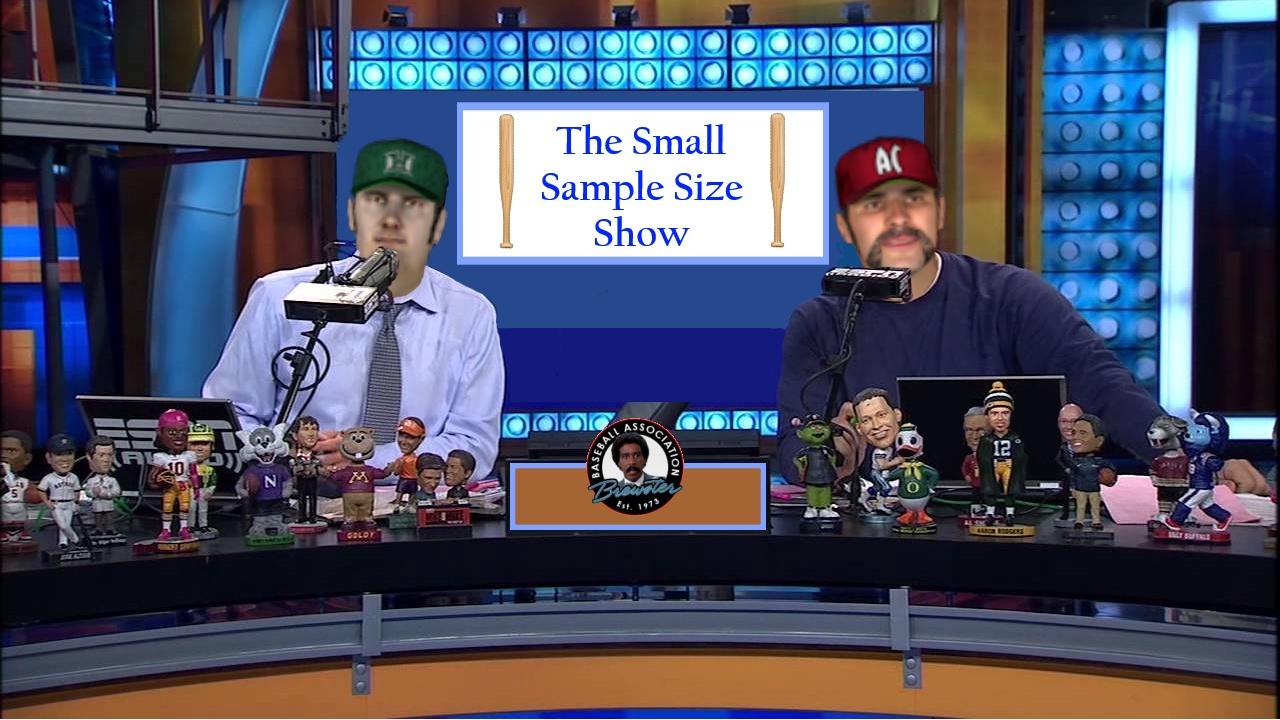 Announcer Johnny Olson: Good evening! It's the moment you've been waiting for -- it's time for another edition of SSSS -- the Small Sample Size Show!

The Small Sample Size Show is the only program that dares to take an infinitesimal amount of data from the Brewster and draw wild and largely unsupported conclusions! Here is our host, former Hawaii Tropics star Jack "Pebbly Jack" Glasscock!

Jack: Thanks, Johnny! And please give a warm welcome to my co-host, whose memories of spring training are mainly of hangovers, former first-round-pick-turned-journeyman-pitcher Tully Crow!

Tully: Spring training, Pebbly -- when everyone is in first place and hope springs eternal!

Jack: That's right. And what better time to make sweeping generalizations about players than Spring Training -- when entire careers are made or broken on the basis of just a few at-bats!

Tully: Yes, it truly my favorite time of year -- separating the studs from the duds based solely on 20 plate appearances or 12 innings pitched!

Jack: That's right -- Spring Training is very the pinnacle of....

Jack: As we record this, spring training is two-thirds done -- twenty days -- more than enough time to make some predictions about the future progress of some prospects.

Tully: In fact, some might argue that's too large a sample size!

Jack: Ok, I'm going to pull some spring training stats that will be simply mind-boggling. For starters, let's go the Heartland Division and the Chicago Black Sox. One of their star pitchers, and one of the league's top starters the past few years, is Amayas Moelling. An All Star last year, 15 wins, and consistently a sub-4.00 era. So how's he doing in spring training, Tully?

Tully: Wow! Fourteen innings pitched and he's getting shelled with an ERA that tops 10! Whoah Nelly!

Jack: Whoah indeed. I think we can safely say that Amayas is washed up, done, kaput. Black Sox GM Vic should be trying to trade him right now before other GMs take notice.

Tully: That's right, soon he'll be lucky to get pennies on the dollar.

Jack: Ok, let's move on now to the Pacific Division and my old team, the Hawaii Tropics. I want to check in on their stud catcher, Ron Shiplack, who's earning a cool $8 million a year.

Tully: For that money, I'm sure he's killing it in Spring Training. Let's take a look:

Jack: My god, he too is clearly washed up. Wonder if fans will start calling him Shitlack? Anyway, shame Hawaii is stuck with that salary! Any chance he'll bounce back?

Tully: I doubt it at this point -- because you can always place faith in a...

Jack: Let's move over to the Atlantic Division, where the Rockville Pikeman are giving a young third base prospect a look-see this spring training.

Jack: Take a look at this -- Galloway leads the entire league so far in spring training in sacrifice flies -- with two!

Tully: That's double the number by all other players who have hit sacrifice flies so far this spring training!

Jack: I think this safely proves that Galloway is here to stay at third base, and Valentin better start packing his bags!

Jack: Finally tonight, let's take a close look at the Frontier Division, home of the World Champion Edmonton Jackrabbits. How are things shaping up this spring for the champs?

Tully: I think they've lost their mojo, clearly too much partying after their Brewster Championship parade last fall!

Jack: Yup, that noise you hear is one million Edmonton residents jumping quickly off the bandwagon!

(Audience roars in laughter, then stands and applauds).

Jack: Yes, you can put money on it! The 'rabbits might as well just hang it up!

Tully: Unfortunately, that's all the time we have this evening. Thank you again to the greatest studio audience we've had all day, and of course to all of you Brewster fans watching at home. I hope you join us next time for another edition of... the Small Sample Size Show!

Announcer Johnny Olson: The Small Sample Size Show has been brought to you by StatsPlus, deceiving you through contorted statistics since 1995! Sign up today for a free 30-day trial at StatsPlus.com! And be sure to stay tuned for a brand new, hour long episode of your second favorite show, "Recency Bias"!

I'm a little disappointed that they didn't cover the story of Hawaii letting their shortstops compete for the final spot in the rotation: