Welcome to week 7 of Makeover Mondays. Where I seem now to be turning this into a daily feature like Ron's BBAT podcast. For this makeover, since Istanbul just won their 2nd UMEBA title, I thought I'd give some love to my roots, and the UMEBA. This was something that Recte asked for a while back so I had it sitting around, and I thought I'd share in celebration of their second consecutive UMEBA title.

Founded in 2037 with the rest of the UMEBA, This team is has now appeared in two consecutive UMEBA championships (2041 & 2042) winning both. They now sit tied with Jerusalem for most UMEBA titles. (Lets go Ben, don't let Brett & me down

). However, it wasn't always these easy for the franchise, which struggled early on in its first 4 seasons, never finishing higher than third in any one of them. Only once getting over 60 wins in that span. But in the last two seasons, the franchise has really come into its own winning back to back titles. You know what's still lagging behind? You guessed it their look!

Initially this was the logo chosen for the team. Hmmm OK, I get it, I think. The original owner went into great detail on how he decided on a name for the team. But the logo / uniform just seem to be an afterthought. I think the word Bosphorus has baseballs in the spaces of the O's, & Ps of the logo. If the team was named for the famous straight in the area, why is there a mountain and no bridge? This looks like a Ski Lodge promotional logo. The Istanbul word mark looks like a 80s metal band font, and not representative of the region. 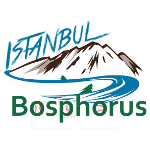 But then somehow it morphed into this...OK, now we have a bridge in the logo, but everything else seems to be a hot mess. Very blurry to start. Are those waves or floaty blue baseballs pretending to be waves in the foreground? There is no wordmark what-so-ever letting the fan know who or what this team is. Its hard to say it got worse, but this is definitely a step backwards. 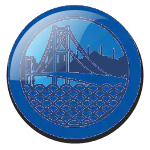 The Makeover had to meet these 3 criteria.
My design style is pretty simple. If the logo looks good in black and white, you have a good logo. Second, I’m a big believer in less is more when it comes to colors for unis and logos. Some of my favorite sports logos have this look. (I’ll leave my two fav sports teams off) - <wink>. If you look at the Raiders, Packers, and Colts in the NFL, each has two colors or 3 colors in their primary designs. The Yankees, Dodgers, and yes, even the Red Menace themselves, the St. Louis Cardinals. All have what I consider a classic logos / color scheme. I could go on, but just note, I am a card-carrying member of Uni-Watch 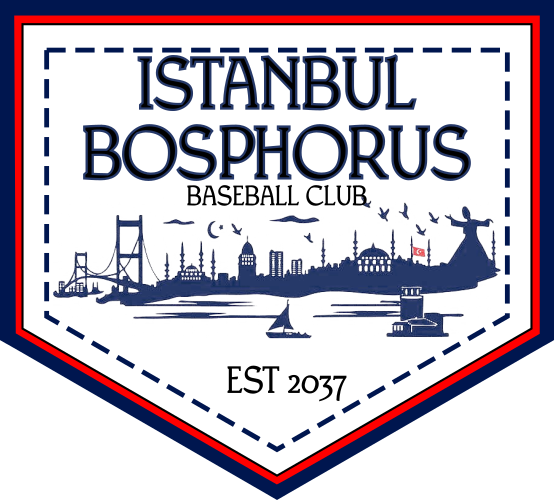 With the Makeover Monday version of the Bosphorus, I total disregarded my rules and started over. My feature, my rules

The new logo now incorporates the Bosphorus straight and the city of Istanbul's skyline in the logo. The wordmark now has a middle eastern feel to it. The entire logo now sites on top of a home plate, so now the viewer can determine that this is a baseball logo, and not one for a middle eastern ski-resort.

Hats: -- They had one hat in game used for both home and away. A tri-color hat, with Light Blue sides, White Brim, and Green bill, with the ski-lodge logo on the bill on the hat. 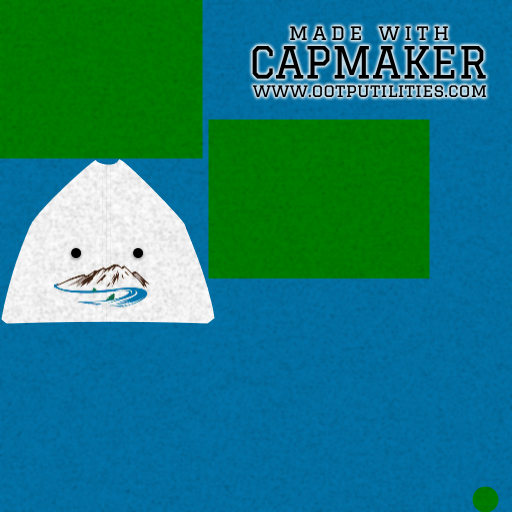 Their updated home/road hat now red and white. The primary colors of the Turkish flag. The logo is the Istanbul "I" with the crescent moon from their flag with a baseball sitting in the crescent moon. 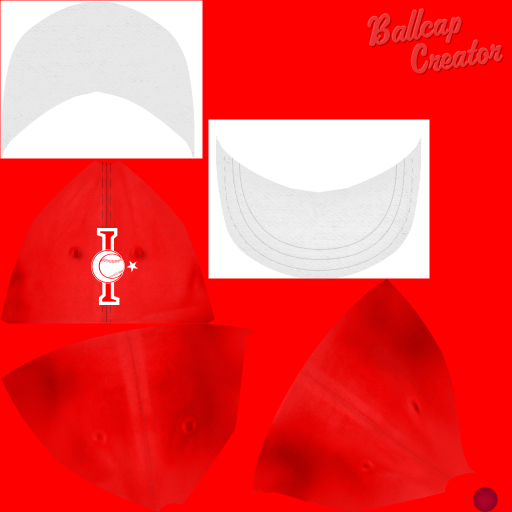 Uniforms: - The Bosphorus had the one uniform in game, used for both home and away.

Looking at the current uniforms, pretty straight forward with Istanbul in the 80s heavy metal band font across the chest, a solid white uniform, full 3/4 green sleeves & collar. Throw in a V-neck style piping around the collar in team colors of green and blue, and your done. Other than the font, not a bad design. 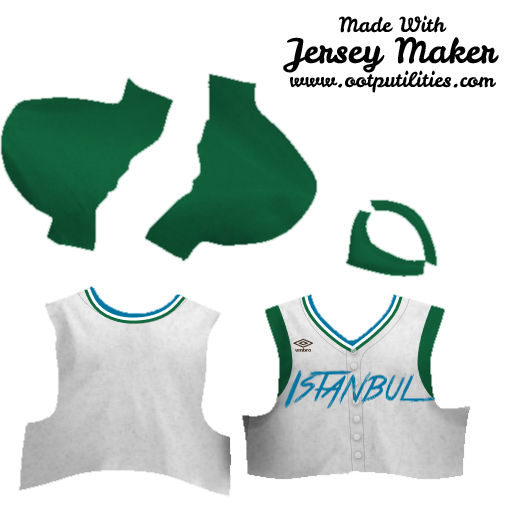 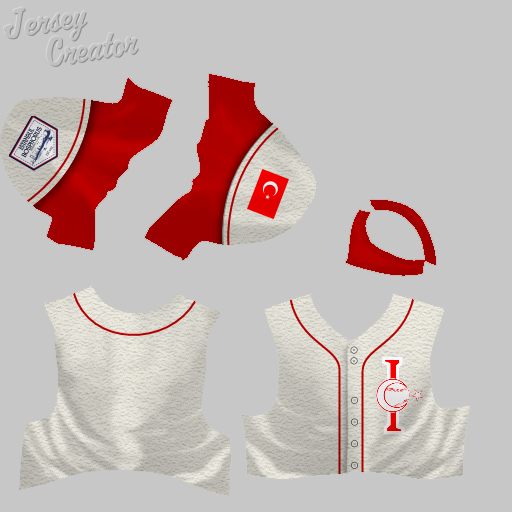 I TOLD YOU THEY'D BE BACK!!! Istanbul's new away uniforms are power blue, with a red undershirt & color. Thin red piping along the sleeves and jersey. The teams name is spelled out across the chest in the new team font, outlined in white. On the left sleeve is the teams redesigned logo, and on the right, the same logo that is on the new hat now. I know "Power Blue" isn't a official Turkish color - but hey - my feature my rules. 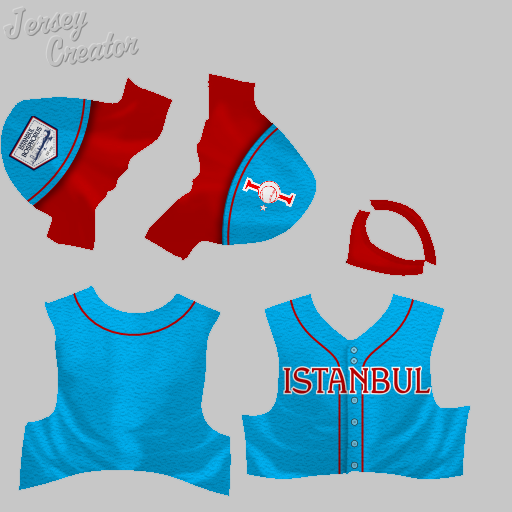 I now return you to your previously scheduled broadcast....or the the Landis Playoffs!

That logo incorporating the crescent moon is fantastic. Blue/green is my favorite uni combo but this update is strong.
"My $#!? doesn't work in the playoffs." - Billy Beane Joe Lederer
Top

The same base concept could be adjusted to retain the blue/green combo. I admit I like the little flare of red in the crescent moon.
Yellow Springs Nine
Playoff Regular, Landis Averse
Top

I liked the old uni but the new unis have that color that pops.

Personally think the logo and unis are better specially the logos, no disrespect as each to their own taste but the first reminds me of a holiday resort logo and I've never liked shiney logos.
Athens Fighting Centaurs 2042-Present 85-78
Cairo Chariot Archers BC 2041 8-5
Top


@jcrmoon42 ... Just submit them as part of the off-season PPT process.

That drunken surfer has disappeared from existence, never to be found again!
Chris Wilson


@jcrmoon42 ... Just submit them as part of the off-season PPT process.

Hmmm...I was thinking from the post that this was a change requested by the league. It has never been my practice to use PP on things that are essentially superficial like logos and uniforms, but I will have to give it some thought. Not sure what I have by way of PP anyhow.
Top

That drunken surfer has disappeared from existence, never to be found again!

Oh, not the drunk logo. That was just dumb. I made the one before that using MS Paint or something and have always been partial to it. No telling if it even exists anywhere anymore.
Top
Post Reply Previous topicNext topic
13 posts • Page 1 of 1