When I'm ridin' 'round the world
And I'm doin' this and I'm signin' that
And I'm tryin' to make some girl, who tells me
Baby, better come back maybe next week
Can't you see I'm on a losing streak? 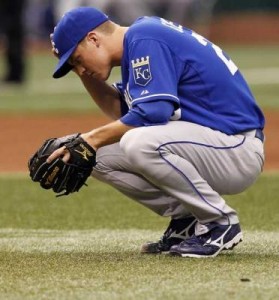 Nothing is worse than a losing streak, right? I mean, just as a Montreal fan, who suffered through 14 straight loses to start the season, or Vancouver fans, who saw their team nearly duplicate the feat when they turned in a 13 gamer a short while later. The advantage, of course, was that since their club’s … erm … achievement … happened outside the glare of opening day, that 13 gamer just kind of fell by the wayside. Until now, I guess. Dunno.

A lot goes into a good losing streak, you know? You have to play bad, of course—that’s a given. But you also have to run into some other series of events to rip off a really good one. Hit a point in your schedule when things are down, or have a couple big injuries or a couple star players who lose it all—or, ideally, a string of these things that just fall together in the perfect way to make it all happen.

Regardless, I was reading about losing streaks somewhere, and I thought it would be interesting to look at them here in the BBA. The season isn’t over, yet, but perhaps you’d be interested to know there have been a total of nine losing streaks of eight games or more around the league. Or that two teams—Montreal and Madison—have managed to create two of those events each, the only clubs to repeat. Of these nine streaks, four have been of nine games or more.

Let’s take a look at them.

You have to start with the one that beats all of them, the Blazers coming out of the gate with a faceplant that history will have to see as so epic that even Blazer fans will eventually laugh about it. The fact is, though, that the team’s schedule didn’t help. Montreal opened with Rockville at home, then moved to Las Vegas, Phoenix at home, and Jacksonville in Florida before Nashville took the first two of three, and Montreal finally had a respite.

And it wasn’t like they were completely uncompetitive. They lost four 1-run games (including the opener to Rockville that went into the 10th inning). Vegas scored four runs in the 8th to win by a run, and Jacksonville did them one better, tearing Blazer fans’ hearts out with a walk-off 4-spot in the bottom of the ninth that included back-to-back homers to take the game—Montreal’s tenth straight loss.

As noted in the opening, the second longest losing streak so far this season belongs to the Vancouver Mounties, who lost to San Fernando on April 13th and didn’t win again unti they squeaked out a 3-2 victory over Long Beach. Facts are fact, too, the games weren’t really that close on the whole. Sure, Des Moines picked up two runs in the 8th inning to win 3-1, but the two runs were unearned. The only other really close game was one that Boise won 11-3 after an 8-run 9th inning. Bottom line: the Mounties were outscored 26 to 75 during this span of putridity.

What are the chances of a team playing .520 baseball losing 11 games in a row? Well? The right answer, in this case, is 100%. The Storm went 18-8 in April, then were 11-9 in May as they entered the last game of a three-game set at Twin Cities on May 23rd. There were ugly signs, though. They were only 2-4 in their previous six games. Ace Ken Walter and shortstop Jay Garrick had both hit the trainer’s table. The River Monsters jumped on the Storm early, and coasted to a 7-4 victory. The Storm would not win again until the day before the 95th anniversary of D-Day.

The next six of those losses came against Madison and Long Beach—two teams that have also struggled at times. And then came Vegas for three games in which Seattle was not particularly competitive. They lost one more to Calgary before Francisco Salazar hit a walk-off single in the ninth to beat the Pioneers. Finally.

To make matters worse, though, after that victory the Storm would rip off another five consecutive losses before stabilizing the ship. Given that they are in a death match for the division as we speak, Seattle fans will always wonder what happened if….

The Wolves big streak is the most recent of the four, starting August 3rd when they wilted against Boise and running through August 13th when they lost the first game of a double header to Seattle. It’s been, as a Wolf fan would call it, a fairly Dire string of games—including a couple blow-outs and two late inning events where the club snatched defeat from the jaws of victory, perhaps the most hurtful was a loss to Heartland rival Yellow Springs on a 9th inning Grand Slam by Aaron Stone that erased a 4-2 score. Of course, they followed that by allowing Seattle three ninth-inning runs to lose 6-4.

Though not the longest, this streak may well be argued to be the “best” such streak in the sense that three of losses came at the hands of a dismal Montreal squad in which they were outscored 25-12.

Other Streaks of Note

If you do the math in the paragraphs noted above, the league has seen five other streaks of eight losses in a row. These are:
Montreal is earning another recognition of dubious merit in that the lead the league in losing streaks of at least three games, with 14 to Madison, Louisville, and Atlantic City’s 11. Charm City has 10 such streaks, and then we come to (interestingly) Jacksonville, San Fernando, Omaha, and (yes) Vancouver with nine such streaks.

On the reverse side, the Calgary Pioneers are arguably the team most resistant to losing streaks, registering only two 4-game binges and a single 3-game stint. Yellow Springs has suffered only four such streaks (1 seven-gamer and three of 3 games). Rockville and Seattle are next at only five each. That’s right. Seattle, owner of the third-longest losing streak in the league is also one of the league’s better teams at avoiding losing streaks.

Re: The BBA's Longest Losing Streaks

We have finally come first in something this season err......
Top

Re: The BBA's Longest Losing Streaks

I remember when we lost 11 straight and 27 of 36 from mid-July through late-August in 2033. That was a frustrating stretch there.