Welcome to Piranha Bites, the unofficial blog of the newly branded Tripoli Piranhas!
Don't rely on bland press releases for your Piranha news --
Bookmark this page for the real truth behind your favorite ballclub!
We have sources inside the clubhouse and in the front office!
No stone will go unturned in our effort to get you the most accurate Piranha news --
And some sharp opinions to stir things up!
January 1, 2045 -- A New Year, a New Name, a GM Blunder

2044 turned out to be a very good year for the Tripoli organization: a late-season surge led to a wildcard berth, the AAA Ndali Barons won the African Baseball Alliance Championship, and then the surprise announcement that the Libyan Generals would become the Tripoli Piranhas, thus shedding themselves of the ugliest logo in baseball history.

All of this causes even the most skeptical fan to have hope for the coming 2045 season. The club even announced a new mascot, Perry Piranha, although the costume, ahem, needs a little work: 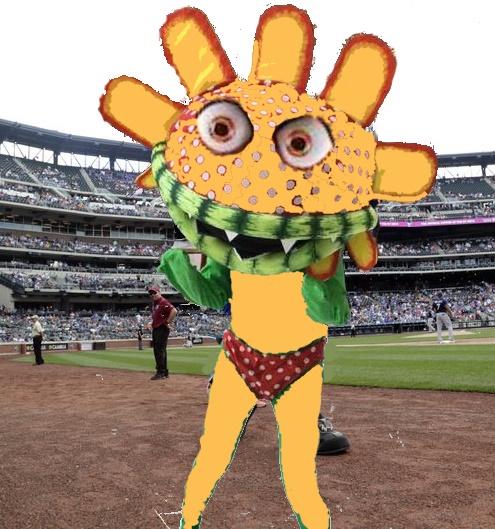 The team hopes Perry Piranha will grow on fans.


Fans, needless to say, took to twitter about the new mascot, with opinions divided between "my kid could have done better" and "an insult to mascots everywhere." Here at Piranha Bites, we admit that Perry is growing on us. He's a bit subversive. We need that in this league.

ROSTER MISHAP:
Anyway, amid all the good will, euphoria and increase in fan interest came word of a front office blunder: GM Mike Dunn failed to protect top prospect 1B Marcho Acheson in the Rule 5 draft, and he was quickly snatched up by division rival Athens.

Pundits wasted no time in taking shots at Dunn. "This guy was clearly too busy bragging about the rebranding and boasting about the size of his marketing budget to pay attention to the basics," said baseball columnist Adali Mifune in Al Jazeera. "He needs to keep his eye, quite literally, on the ball." Piranha Bites gives tip of the hat to Fighting Centaurs GM Jay Tannehill for the astute grab.

Dunn had no comment on the blunder. One clubhouse source said the rebranding had nothing to do with it. "Fact is, this guy hasn't been a GM for many years, since the 90s. Being rusty doesn't quite cover it. He needs to put the training wheels back on."

The club may profit
from Profit's fastball.


PROFIT MOTIVE:
Dunn did manage to divert attention from his mishap by signing a free agent: veteran Grellen Profit, most recently of the Boise Spuds in the Other League, inked a one-year, team-friendly contract for $1.5 million. Profit was a spot starter in the MBBA, but the Piranhas expect to have him in the rotation from the start. "His fastball nears 100, and we think he can regularly go six or seven innings," said pitching coach Rezaul Qasim. "We need his reliability, his speed and his veteran presence." Plus, there is no such thing as a bad one-year deal.

Other FA pickups include a pair of catchers, Katsumi Kato and Benton Jennings, on minor league deals. The signings help add a bit of depth to a position where the organization has been thin at every level. With a limited budget, it is unclear if the front office has plans for more signings, but we're watching closing as the free agency period comes to an end.
Mike Dunn
GM, Tripoli Piranhas (2044- ) (formerly Libyan Generals)
Division Wildcard '44

I do NOT want to see that thing sans culotte. Love how the blogs sources are burned right in the header