Tripoli, August 4, 2044 - Hacked emails from Generals GM Mike Dunn obtained by Generally Speaking indicate that he has no intention of staying long-term, and in fact is using the position as a stepping stone to reclaim a general manager post in the Brewster Baseball Association in the United States.

In the emails, obtained from unnamed sources, Dunn laments his time in Libya, which began only three months ago. "Get me out of this s--hole," he exclaims in one email. "The rats in the clubhouse dining room could play better than these guys."

The exchange in the hacked emails is between Dunn and an unidentified acquaintance, apparently an American, who uses the account brewsterrules68@yahoo.com. In the most damning email, Dunn writes: "I'm betting a GM or three in the Brewster get fired in the off-season. I'll no doubt be one of the top candidates to fill a vacancy." And, in a later email: "My agent is already talking to some Brewster owners who are unhappy with their GMs. They are more likely to sack those losers if they have someone ready, willing and able to step in."

After some of the emails were shared by Generally Speaking earlier today on social media, fans were furious. "We're being used," said one Generals diehard in a Twitter reply. "We should run Dunn out of town right now." Others called for his immediate decapitation, with the hashtag #offwithhishead trending on Twitter. 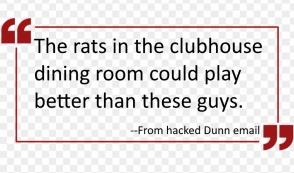 A spokesman for Libyan Supreme Commander General Razeen Akbad el-Assad urged calm. "We understand that many citizens are offended by the words of the heathen American. They should rest assured that he will be dealt with in an appropriate manner. But do not let this dissuade us from the ultimate goal: becoming so dominate in UMEBA that the Brewster itself would have little choice but to invite the Generals into that league."

Dunn has not served as a GM in the MBBA since 1996, and while his two-year stint with the Black Sox brought two Landis Cups, the game has changed drastically since then. "This dude seems to think he can step right back in," said one rival UMEBA GM who asked not to be named. "But players are different, the game is different. He's in for a rude awakening."

And Dunn will have competition: other, longer-tenured UMEBA general managers are thought to be vying for Brewster vacancies should they occur. In addition, former GM Ted Schmidt, now a popular podcaster and youtuber, is said to be itching to return as a GM, and is expected to a heavy favorite for any such openings.

Dunn himself could not be reached for comment, but apparently has sacked the team's IT security director, and also increased security at his seaside Tripoli condo.
Mike Dunn
GM, Libyan Generals (2044- )
GM, Chicago Black Sox (1995-1996)
Landis Champion: '95, '96
Top

That condo have a safe room/bunker?
"My $#!? doesn't work in the playoffs." - Billy Beane Joe Lederer
Top