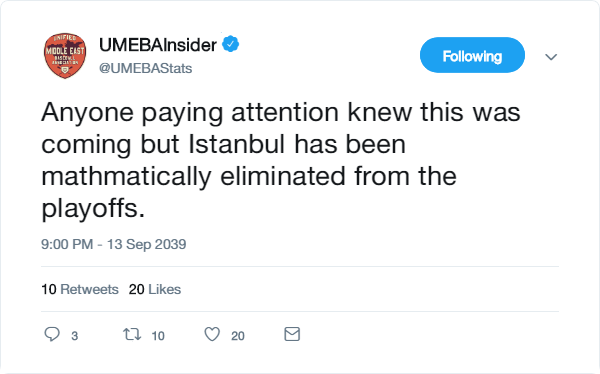 All Istanbul fans knew this was coming but 2039 will not be the year that Istanbul makes the playoffs for the first time. They have been mathematically eliminated today. Owner Samuel Johnson released a statement today, stating in part "We know our fans are ready for a long playoff run and so are we. Unfortunately this season didn't go the way we hoped." "There has been change in the front office this season and we hope we have found the GM of the future in Jeffrey Everroad. We have faith that 2040 will a great year for the Istanbul Bosphorus."

That doesn't do much for the fans currently attending games or that will the rest of this season. Sepember so far has been a bad month for Istanbul going 8-10 so far on the month, with 7 games remaining.

Bernard Melman of the Bosphorus just might have to call it quits for the season. The 26-year-old Istanbul starting pitcher received a possible season-ending injury against the Manama Pearls recently at Manama Fields. Melman suffered a torn back muscle while throwing a pitch. The Bosphorus medical staff said he could be out quite some time, as much as 4 months.

I like that the UMEBA is raising its social media profile.
Yellow Springs Nine
Playoff Regular, Landis Averse
Top