On July 2nd, the Manama Pearls dismissed their entire coaching staff and brought in a new wave of younger minds to help GM Dillon Lowery run the major league ball-club.

Following the new regime's entrance, the Pearls organization saw a mix-up of not only the lineup, mindset, and bullpen management, but the Pearls' farm system saw a shakeup of where prospects will be living for the foreseeable future. It has been an interesting, yet productive month of new blood.

SP Johan Trojka celebrated his UMEBA debut this month and has solidified himself as the #4 starter. Despite not tallying a win as a Pearl pitcher yet, he has accumulated a 3.82 ERA, 22 Ks to 8 BBs, and a 1.1 WAR already.

The Manama Pearls managed a 14-12 record in the month of July and now find themselves in a division tie with the Baghdad Kings. Both the Pearls and Kings sit at 49-57 in the early days of August and now fight for the lone BURT Wild Card berth for the postseason.

The Pearls have yet to miss the playoffs in their four years of existence.

The Pearls of the Month The Farm Update 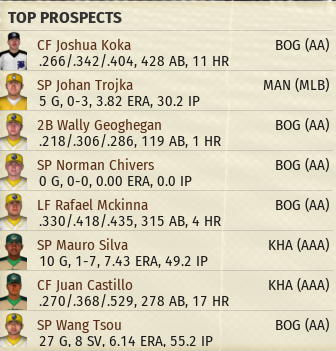 All very tight for the UMEBA, bottom four teams covered by two games lol. While that might make it harder for Mumbai, the bottom three in the BURT are within two of each other.

Damn... that's a sweet graphic. Nice work.
California Crusaders
Life is a bit more beautiful when time is measured by the half inning rather than the half hour. -- db "Shoeless" Olmsted
Top
Post Reply Previous topicNext topic
3 posts • Page 1 of 1